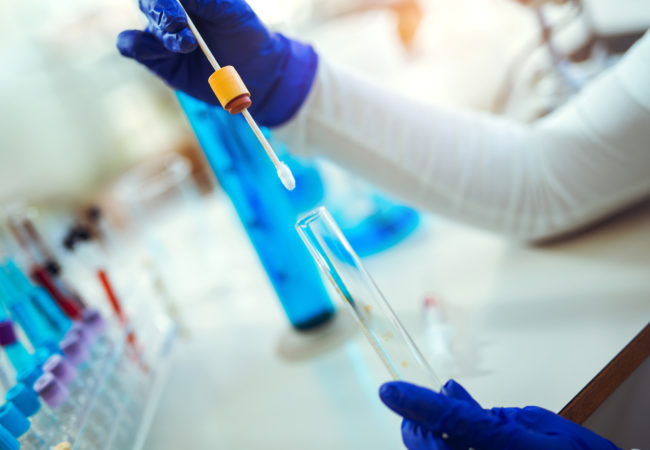 The Human Genome Project was a collaborative venture to map the entirety of human DNA. It finished in 2003, and in the 17 years since, we’ve luckily avoided falling into a society that uses genetic information to discriminate against its citizens. But the potential is there.

To help prevent genetic discrimination, Congress passed the Genetic Information Nondiscrimination Act of 2008 (GINA). Let’s take a look at this law and how it protects employees from discrimination, including employer requests for DNA testing.

The Genetic Information Nondiscrimination Act of 2008

Title II of GINA deals with genetic discrimination of employees in the workplace (and is the section we’ll focus on in this article). Under GINA, an employer may not use an individual’s genetic information to make employment decisions concerning:

GINA also prevents an employer from asking, requiring or purchasing genetic information with respect to a current or future employee (or an employee’s family member). In other words, subject to a few exceptions, if your employer is covered by GINA, it may not ask you to take a DNA test. The exceptions include:

Many, but not all, employers are bound by GINA’s mandates. In addition to private employers with 15 or more employees, covered employers include local, state and federal governments, employment agencies and labor organizations.

Finally, employers may not engage in any form of retaliation against a prospective or current employee who takes any step to oppose genetic discrimination as prohibited by GINA. This means if an employee files a discrimination complaint, cooperates with a discrimination investigation or participates in a GINA lawsuit, the employer may not fire, bully, demote or reduce the pay of that employee.

Enforcement of GINA violations generally follows the same process as complaints under Title VII of the Civil Rights Act of 1964 (Title VII). This means the U.S. Equal Employment Opportunity Commission (EEOC) enforces the Title II provisions of GINA and employees have 180 days to file a charge (complaint) with the EEOC. This deadline may be longer in certain situations, although it’s far shorter for federal employees, who only have 45 days to contact an EEO Counselor if they feel their GINA rights have been violated.

Along with the reporting process, the potential damages an employee may recover for GINA violations parallels what’s available under Title VII. In cases where the employee can show the employer intentionally discriminated against them because of their genetic information, an employee may be able to recover the following types of damages or legal relief:

There are caps on some of these damages. For example, the maximum a plaintiff can recover for both punitive and compensatory damages is $300,000. This limit applies to employers with more than 500 employees. For smaller employers, the following limits apply:

To see how these damage limits apply, as well as look at an example of employees exercising their rights under GINA, let’s take a look at the very famous cases involving the “devious defecator.”

Atlas Logistics Group Retail Services (Atlas) was in the business of operating warehouses and transport trucks for the grocery industry. Atlas noticed that someone (or a group of people) was going around and defecating on grocery store products in one of Atlas’ warehouses.

After doing some investigating, Atlas created a list of possible suspects, which included Jack Lowe (Lowe) and Dennis Reynolds (Reynolds). Atlas asked both of them to submit to a DNA test so Atlas could confirm if their DNA matched the feces samples left in the warehouse.

Lowe and Reynolds agreed to be tested, but only out of fear of losing their jobs. Despite being exonerated by the DNA tests, they became subject to embarrassing jokes in the workplace.

Both Lowe and Reynolds sued Atlas for violating their rights under GINA. Before a trial could be held, both sides filed motions for summary judgment. The judge decided these motions in the plaintiffs’ favor. The judge concluded that Atlas had violated GINA when asking the employees to take the DNA test, but sent the case to a jury to decide what damages the plaintiffs would receive.

Atlas filed an appeal, but voluntarily dismissed it soon after agreeing to pay the more than $1 million judgment to both plaintiffs.

GINA is a fairly new law, but it seems to have enough teeth to provide practical protections for employees. Some states, such as Virginia, also have their own laws outlawing genetic discrimination in the employment setting.

5 Strategies To Improve Your Dermatology’s Practice Prior Authorization Process

© Copyright 2018-2020 BrightDrive HCS | All Rights Reserved
This site uses cookies to count visits and traffic sources so we can measure and improve site performance to give you the best possible experience of the site.
You can view our Privacy Policy for more information.Accept

This website uses cookies to improve your experience while you navigate through the website. Out of these, the cookies that are categorized as necessary are stored on your browser as they are essential for the working of basic functionalities of the website. We also use third-party cookies that help us analyze and understand how you use this website. These cookies will be stored in your browser only with your consent. You also have the option to opt-out of these cookies. But opting out of some of these cookies may affect your browsing experience.
Necessary Always Enabled
Necessary cookies are absolutely essential for the website to function properly. This category only includes cookies that ensures basic functionalities and security features of the website. These cookies do not store any personal information.
Non-necessary
Any cookies that may not be particularly necessary for the website to function and is used specifically to collect user personal data via analytics, ads, other embedded contents are termed as non-necessary cookies. It is mandatory to procure user consent prior to running these cookies on your website.
SAVE & ACCEPT